The earliest printed image of a human skeleton is this cartoonish image from a German block book from the 1450s. [i]

It is one of a series of skeletons in the popular genre known as the danse macabre or dance of death. Art historian extraordinaire Jack Hartnell first told me about this book.  It is now at the University of Heidelberg library in Germany, and the digital version is here.  A block book was printed from carved wooden blocks, one block per page, rather than from movable type cast in metal.  Both techniques developed around the same time.  Block books were cheaper to produce than books with moveable type and tended to be religious texts and almanacs, works that were heavily used; therefore not many have survived.

The human skeleton, and its image, has been a common reminder of death and mortality for millennia.  In his novel Satyricon, written during the reign of the emperor Nero, the ancient Roman writer Petronius (27-66 CE) described a small articulated silver skeleton

that graced the banqueting table of the wealthy glutton Trimalchio. Its purpose was to remind the debauched diners to ““Let us live then while it can go well with us.”  It probably looked like this tiny silver skeleton found at Pompeii, only 110 millimeters (4.3 inches) long. [Memento mori, Roman, 199 BCE-500 CE Credit: Science Museum, London. Wellcome Images]

The fifteenth and sixteenth centuries witnessed a Golden Age of symbolic skeletons.  The plagues and wars of the fourteenth and fifteenth centuries inspired the danse macabre, which depicted whimsically dancing skeletons leading the living to their deaths. The first of these, painted around 1425, adorned the walls of the charnel houses at the burial ground next to the church of Saints-Innocents (Holy Innocents) in Paris. Charnel houses were where the bones of the dead were deposited when the cemetery became too full. The original painting no longer survives, but in 1486 the Paris printer Guyot Marchant printed a version of it, with accompanying verses in the form of dialogues between Death and his victims. The dance followed a prescribed order, mimicking the order of society, beginning with the Pope and the King, and progressing down the social ladder to the lowly plowman.  Death came for us all.

Many dances of death appeared for the next century, inside and outside of churches, on the walls of houses, and after the 1450s, in print.  Although this well-known image of maniacally dancing skeletons from the Nuremberg Chronicle of 1493

has often been referred to as the first depiction in print of a human skeleton, the Heidelberg dance of death precedes it by nearly forty years.

The Heidelberg block book is hand-colored, and we can view it as a fifteenth-century graphic novel. 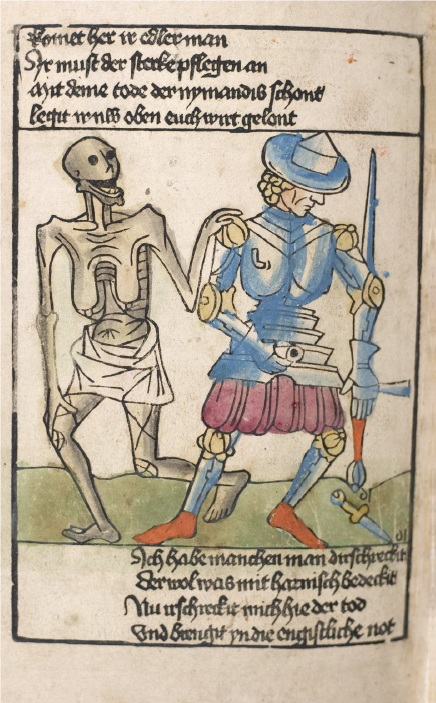 The skeletons, as in other versions of the dance of death, are not quite skeletons.  They have bony limbs and exposed ribs but intact hands and feet.  One of the figures even has breasts.  They represent a half-decomposed body recently emerged from the grave, resembling the transi figure or cadaver effigy from the same period, which depicted the dead person as a decomposing corpse, as in this tomb of a bishop from 1528.

The exposed ribcages and open abdomens of most of the figures in the Heidelberg block book make them look like they are partially dissected; this image from the 1345 anatomical text of Guido da Vigevano shows a similar figure.

The Heidelberg skeletons play horns or bagpipes or drums, wield swords or a bishop’s crook.  Some are partially dressed. What they have in common is the grinning skull.  One of the German verses that accompany each image refers to Death as “eyn swartzer Man,” a black man, and the skeletons are colored a dull gray rather than the white we might expect.

The “dance of death” genre continued for another century.  Hans Holbein the younger (1497/8-1543), famous for his portraits of Henry VIII of England and members of his court, engraved a memorable version in the 1520s, printed in 1538.  Holbein’s Death is still not entirely a skeleton, but his figures compensate for their anatomical flaws with a dramatic realism that earlier dances of death lack: they bend, crouch, run, duel.  In this scene Death drives the peasant and his skinny plowhorses to their demise.

The artists who depicted the dance of death probably never saw an intact skeleton.  Their knowledge of the skeleton most likely came from viewing decomposing corpses or individual bones.  But by the 1530s that was about to change.