On the 12th of May, 1543, Jakob Karrer von Getweiler was executed in Basel, Switzerland.  Reports say he was beheaded, although hanging was a more usual mode of execution.  Karrer was a bigamist who attacked his legal wife with a knife after she discovered his second wife.   According to a contemporary account, Karrer was a habitual criminal, and he left his wife grievously injured.  Although she did not die, he was sentenced to death.

The renowned Flemish anatomist Andreas Vesalius had been in Basel for several months to supervise the publication of his magnum opus, De humani corpus fabrica libri septem (Seven books on the structure of the human body), published in Basel later that year.

Perhaps it was inevitable that Vesalius was granted Karrer’s body to dissect.  Only executed criminals could be publicly dissected, with the blessing of the Basel Senate.  We do not know if the Senate offered Vesalius the beheaded body or if he requested it.  But Vesalius dissected Karrer, in front of an audience.

He then took Karrer’s dissected remains with the intention of making an articulated skeleton.  In chapter 39 of Book 1 of De fabrica, Vesalius had detailed for the first time the lengthy and gruesome process of constructing a skeleton. 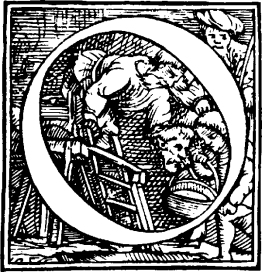 He included this illustration of someone handing down a decapitated head from a scaffold. Some of the techniques had existed for quite a while; the 14th century physician Guy de Chauliac noted “Nous faisons aussi l’Anatomie [d]es corps desseichez au Soleil, ou consommez en terre, ou fondus en eau courante ou bouillante » (we make an anatomy of bodies dried in the sun, or consumed by the earth, or dissolved in running or boiling water – “an anatomy” here indicates a skeleton).   Macerating in water and then drying in the sun were long-known methods of preparing bones for transport.

In his chapter, Vesalius first described the conventional method of preparing a skeleton, and illustrated it in one of the initial letters in his book.

As much flesh as possible was cut off of the body – without severing the joints or the ligaments – before it was put in a long perforated box, covered with quicklime, and sprinkled with water.   After a week the box was placed in a stream of running water and the flesh would presumably fall off of the bones and be washed away over a period of several more days.  Then the body was removed from the box, further cleaned with a knife, and posed in the sun to dry in a particular position, held together by its ligaments.

Vesalius described this method only to denigrate it as time consuming, dirty, and difficult; moreover, the blackened ligaments would cover the joints and other parts of interest.   He proceeded to describe in excruciating detail the proper way to separate human bones from flesh.  “Get any kind of cadaver somewhere,” he began.  The corpse was dissected and then boiled “in a large and capacious cauldron … of the kind women use for the preparation of lye over the fire.” He saved the cartilaginous parts such as the ears and stuck them to a piece of paper, and placed the organs and blood (squeezed out of a sponge) in another vessel.

The bones were boiled, carefully covered by water at all times, for several hours, with regular skimming off of froth and fat.  The bones of children, he said, take less time than adults.  “The object of the cooking is to clean the bones as thoroughly as is done with the knife while eating.”

Therefore one should pull out individual bones from the “broth” with tongs from time to time and clean them further with the hands or a knife, but this job should not be entrusted to a mere amateur.  The knives he used were similar, if not identical, to the knives wielded by such master meat-carvers as Vincenzo Cervio later in the sixteenth century, and the language of cooking is explicit.  One then placed the cleaned bones in more boiling water, and finally removed them, carefully drying them with a rough cloth to remove remaining bits.

The bones should not be allowed to dry too much.  If they are not too hardened, a shoemaker’s awl may be used to punch holes for the copper wire used to string the bones together, although in the 1555 second edition of De fabrica Vesalius also described a bone drill he had constructed. 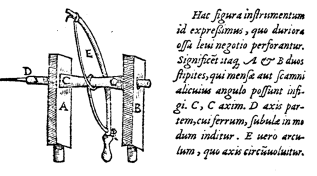 He recommended starting with the feet and working upward, the reverse of the common head-to-toe order of dissection.  An iron rod, made to order, supported the vertebrae; the arms were then assembled and wired to the trunk.

With characteristic macabre whimsy Vesalius recommended posing the skeleton with a scythe, or a pike, or a javelin, and suggested stringing the ear bones and ears onto a nerve to make a necklace (when I read this I could only think of Tim O’Brien’s surreal story “The Sweetheart of Song Tra Bong,” in The Things They Carried (1990), and its heroine Mary Anne who wears, at the end, a necklace made up of severed Viet Cong ears).

The skeleton of Jacob Karrer, unlike most others from this era, still survives, and is on display at the anatomy museum in Basel, where I saw it a few months ago.

One thought on “Vesalius and the beheaded man”