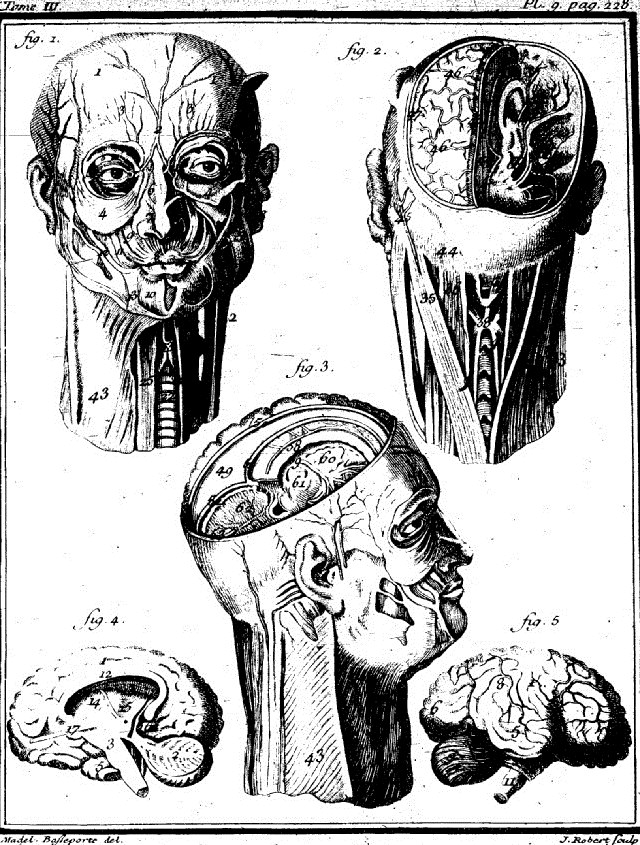 The eighteenth-century anatomist William Hunter (1718-1783) told his students that the practice of dissection “familiarizes the heart to a kind of necessary inhumanity.”(1)   A few decades  earlier, Louis-Jean-Marie Daubenton (1716-1800) expressed more forcefully the “secret horror” that dissection, particularly of the human corpse, elicited in most of its practitioners.   His comments appeared in the “Description du Cabinet du Roy” (description of the Cabinet of the King), which began the third volume of Histoire naturelle générale et particulière, avec la description du Cabinet du Roy of Georges-Louis Leclerc, Comte de Buffon (1707-1788), published in 1749.  Daubenton had studied dissection in the 1730s with François-Joseph Hunauld at the Jardin du Roi, the royal botanical garden, which housed the royal “cabinet” of natural history and anatomical specimens, including a room devoted entirely to skeletons.

Buffon became intendant or director of the Garden in 1739, and a few years later summoned Daubenton (now qualified as a physician) from their hometown of Montbard near Dijon to help with the inventory of the collections.  Daubenton’s detailed inventory of the human remains at the Garden, which included skeletons, preserved body parts, and anatomical models in wax and other materials, occupied over half of volume III but is much less well known than the second half of Buffon’s “Histoire naturelle de l’homme” (Natural history of man, begun in volume II) that concluded the volume.  Daubenton began the section on anatomical models and waxes with this heartfelt plea for dissection, however horrific its seemed to its practitioners.  (The translation is mine, and I have kept Daubenton’s 18th-century punctuation.)

“Most men naturally have a secret horror for anatomical dissection: nearly all those whom I have seen enter for the first time into an anatomical theater have been seized with that kind of terror that the view of a cadaver, bloody & torn to shreds, imprints; this image of death seems to express at the same time a sensation of the most cruel pain: it is only by the force of habit that one is able to view in cold blood such hideous & terrible things: also they are only ordinarily those obligated by their status as anatomists, who study that science in dissecting the human body, others would be moved far away by the mere smell that a cadaver exhales when it is kept; that odor is even sometimes so penetrating, that the most experienced Anatomists  are affected by it to the point of succumbing to colics & other illnesses.  The difficulties that one experiences in order to have subjects on which to pursue this study, renders it as costly as it is tiresome; despite these obstacles anatomy has made very great progress in recent years, many authors have given us exact descriptions & faithful drawings of all the parts of the body: but what are these descriptions & images in comparison to the real things?  It is a shadow in place of the body.” (2)

One thought on “The Secret Horror of Dissection”