I’ve been reading another book in animal studies that talks about the other and even “othering,” a solecism I can barely tolerate and will keep in quotation marks. 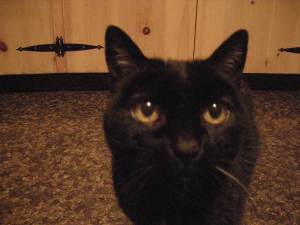 A number of philosophers have variously defined what the “other” is, ranging from God to animals to women to the disabled to the colonized. Except for God – and who knows what She thinks – “othering” is to assume an attitude of human (read white, male, European) superiority over a subjected group. It assumes that we academics who write about such things are somehow the norm against which “otherness” is measured, even though in disability studies we are adamantly told we are not. The norm that is.

While the use of the concept of “other” has had its uses, it seems now to be used as a shorthand for just the opposite of its original meaning. Recognizing, say, animals or the disabled as “other” is now a good thing. Those who use the vocabulary of “othering” say that the concept of “the other” recognizes difference.  “Othering” then is recognizing the world as it is. The opposite of this concept is branded as a kind of naïve universalism, the notion that all humans are at base alike. The next step in this non-othering is the idea that the political philosopher Giorgio Agamben referred to in his book The Open as the essential identity between human and animal, which will, he said, result in a post-historical, post-humanistic era. To me the current use of “the other” simply reifies an imaginary binary that puts one set of arbitrary categories – white or heterosexual or European or human– on one side and equally arbitrary but somehow more real or important categories of race or gender or sensory ability or species on the other. Agamben postulated two boundaries that early modern humanism had set for the human: between the human and the divine on one side, and between the human and non-human nature on the other. The space between these two aspects of what constitutes the human is what I think Agamben refers to in his book as “the open.”

To refer to animals as “other” denies the common tendency of humans to anthropomorphize animals, to think of them in human terms. But it also signifies a gulf of understanding and comprehension. I have referred to the ineffable otherness of animals, the part we can’t get. I don’t know what my cat thinks.

But I now also believe that “othering” pushes animals away, out of our necessary frame of reference, into a black box of nescience.  A little nescience, not knowing, can be good.  I recently heard someone speak on wilderness restoration who urged the need to acknowledge that sometimes we don’t know what to do and should therefore leave things alone. But that only goes so far, and not knowing can slide into not caring and wilful ignorance. The notion of “the other” in relation to animals seems to me to advocate nescience.  Not knowing, leaving the mysteries alone, perhaps allows animals to relate to us or not, to tell us their stories in their own time.  But we are not really at a point in history where leaving it alone or fragmenting the world into smaller and smaller interest groups seems like a good option. Maybe it’s time to give the tired notion of “the other” a rest.