The eighteenth-century Dutch physician Herman Boerhaave (1668-1738) wrote many books, but among his most famous were his Aphorisms and his Materia medica, both of which were translated and reprinted throughout the century.  They distilled the conventional wisdom of the day and added Boerhaave’s own astute observations.  The following observations from Materia medica follow a logic we no longer understand and open a small window to that foreign country we call the past.  Papin’s Digestor was an early pressure cooker. 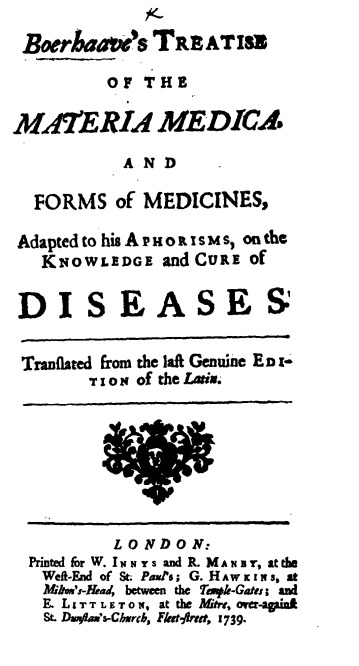 “In the CURE of DISEASES from a Weak and Lax FIBRE

The Milk of a sound full grown Woman, using gentle Exercise and wholesome Food, either suck’d or drank presently, warm, without undergoing any Change from Fire, and the better if drank after a perfect Digestion in the Nurse.  The next to this in Virtue and Goodness is Asses Milk, which is better than that of Goats, and this last is preferable to that of Cows. Their use is determined by the same Laws.

The white of a new laid Egg still warm, diluted in equal quantities of Milk and Water without the Application of Fire.

The best Broths for this purpose, are those prepared from the Flesh of a sound young exercised Animal, carefully cleared of its Fat, bruised, minced, and stewed in Papin‘s Digestor, then cooled, and again freed of its Fat and Dregs.

In defect of this Machine, a Kettle or Pot may be used, but the more subtle Parts then evaporate. — Hence the Cause of the Fierceness of those Animals that feed upon others alive.

That prepared of the Pullet Kind is the best, then Veal, next Mutton, and lastly Beef Broth.  That made of a Mixture is the strongest.”