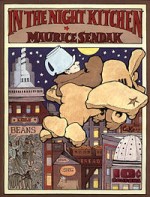 Within the past year, two of my favorite authors died, Maurice Sendak and Russell Hoban.  Sendak was undoubtedly the better known, author of picture books such as the wonderful Where the Wild Things Are and my favorite, In the Night Kitchen, as well as an illustrator of many more books.  Hoban also wrote children’s books, the wry and gentle series about Frances the Badger (mainly illustrated by the inimitable Garth Williams, who created Charlotte the spider).  He wrote adult novels as well, which I have not read, and the extraordinary Riddley Walker.

Riddley Walker (1980) is a post-apocalytic story about a twelve-year-old boy who has the power to interpret myth – to riddle.  He lives in southeast England some centuries after a nuclear war has ended Western civilization.  Odd remnants of it remain in the form of a legend known as the Eusa story and in a traveling Punch and Judy show that serves as what government there is in the rough settlements of what used to be Kent.  All of this sounds strange, and it is; but what makes this novel extraordinary is its use of language.  When civilization collapsed, so did language.  Riddley speaks and writes a phonetic, garbled patois.  Hoban’s imagining of this shattered language gives

this novel its power.  I recently read Cloud Atlas and its central post-apocalyptic story is also written in its own half-collapsed language.

Like Hoban, Sendak dealt with myths and half-remembered fears.  His books all have that quality of dreams which bend and distort reality.  Max sails for a year and a day, and Mickey falls through the floor (and out of his clothes) into the kitchen.  Goblins steal babies (I found Outside over There too dark to read to my toddlers).  He too played with language, slipping in and out of meaning as his images slipped between waking and dreaming.

To Sendak, technology is toy-like and playful: Max’s boat could be folded of paper, and Mickey’s airplane is made of bread dough.  Technology is much more ominous to Riddley Walker.  As in Walter Miller’s A Canticle for Leibowitz (written two decades earlier), the remnants of techno-civilization are mysterious and awe-inspiring.  Riddley marvels at the remains of a power plant in Cambry (Canterbury).  But the awe elides to a pervasive sense of loss, as Riddley recognizes how much knowledge has disappeared.  No one knows how any of this might have worked.  Many seek the secret of the Little Shyning Man the Attom.

When Riddley finds a stained glass window in Canterbury Cathedral dedicated to St. Eustace, this myth mingles with the Eusa story.  Hoban explores history and language, how our stories develop and change over time, and how we need stories to tell ourselves.  Like Max and Mickey, Riddley reaches deeply into the half-slumbering core of ourselves to find what meaning he can.